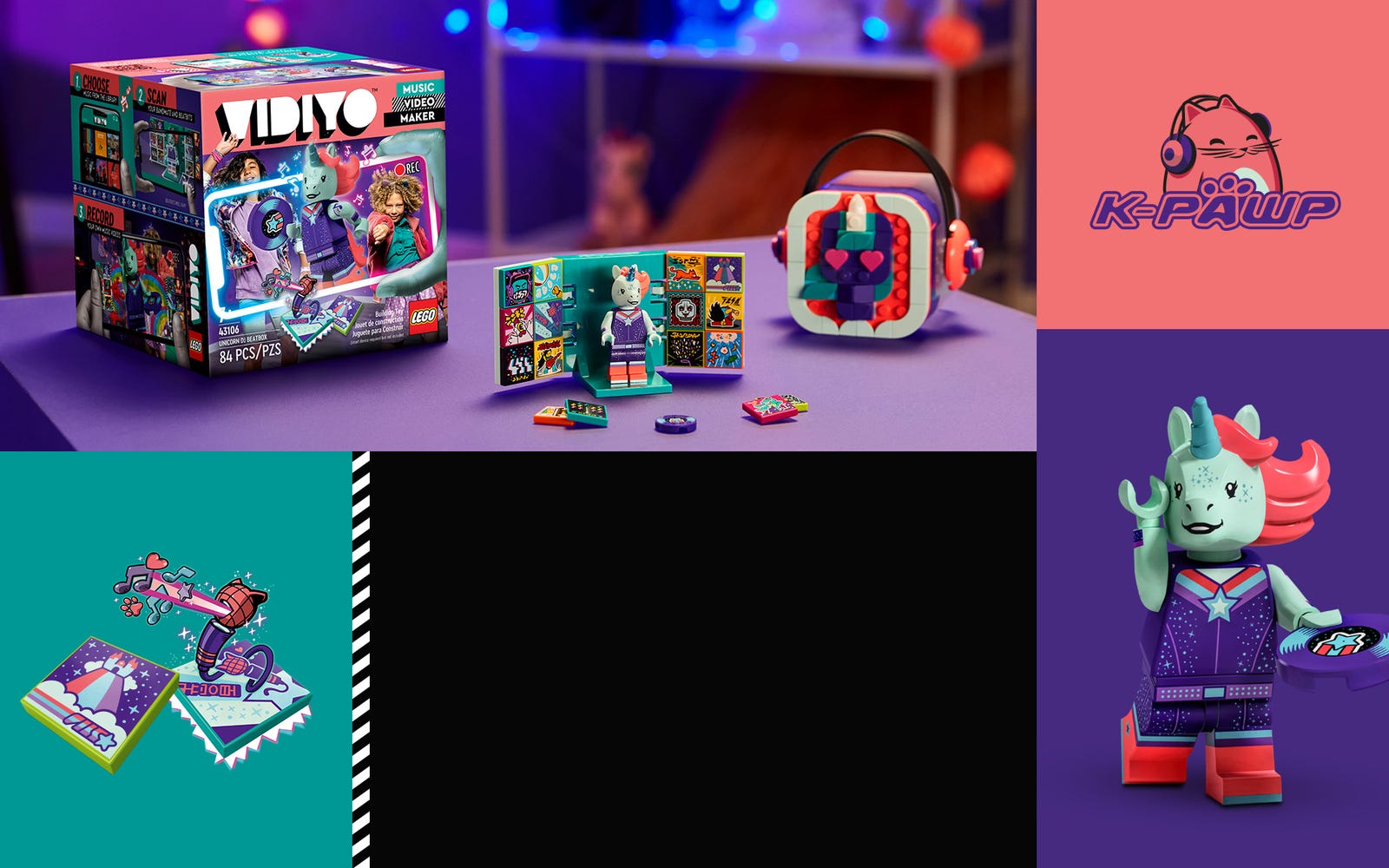 Despite building a toy empire on interlocking plastic bricks, Lego hasn’t shied away from modern technologies. Lego’s video games have been immensely popular for years, and last year it introduced the first interactive Lego figure with Lego Super Mario. This year, the toymaker has partnered with Universal Music Group for a new mobile app that turns kids into music video producers while requiring nothing but basic brick-building skills. Lego Vidiyo centers around a new mobile app (presumably coming to both iOS and Android devices) that works alongside a new line of minifigures and new 2×2 square building elements called BeatBits that the app can visually recognize. Lego hasn’t revealed details on what Vidiyo sets will actually look like, or if the figures and BeatBits pieces will be sold in blind bags like its popular minifigure collections are, but what is known is that the app will bring all of those elements together using augmented reality technology to help kids easily make their own music videos based on popular tracks in the Universal Music Group catalog. Once the music video’s soundtrack has been selected, kids can assemble their bands from the new lineup of Vidiyo minifigures (whose digital doppelgängers can have their appearance customized later in the app) and then choose what effects they’d like to use to enhance their productions by selecting from the various BeatBits. All of those elements are then scanned into the app using a device’s camera, and the virtual Lego band can appear to perform anywhere—be it a Lego-built stage or on top of a pile of dirty socks—through augmented reality tricks. During a live performance, the BeatBits show up as virtual buttons that can be pressed to trigger special effects like confetti showers or color filters, or audio effects like a DJ scratching or a saxophone solo. Music videos are limited to a 60-second performance of a song during which kids can also trigger dance moves and special performances from the band, but afterwards the videos can be trimmed to 5- to 20-second clips that can then be shared with other users of app. For safety and security reasons, Lego will be moderating every video before upload and will not allow clips featuring young children or unwanted content. The Lego Vidiyo sets will be officially available starting March 1, with more details about pricing and how minifigs and BeatBits can be collected in the coming months. For its first official collaboration with Nintendo, Lego could’ve just rolled out another series of collectible minifigures featuring beloved video game characters and fans would have been very happy. Instead, the toymaker is introducing a new way to play with its iconic bricks, allowing builders to create real-life video game levels that can be played using an animated Mario figure. A few days after March 10, which Nintendo has successfully turned into another corporate holiday (Mar10 day), Lego has revealed more details about its upcoming Super Mario sets and what the figures will look like. Specifics on pricing and availability are still mysteries at this time, and that’s probably going to be a common thread going forward in 2020, given how the has disrupted manufacturing and supply chains all over the world—particularly when it comes to electronics. The sets appear to allow builders to create their own Super Mario levels using obstacles and hazards from the popular series of video games, including warp pipes, moving platforms, question blocks, pits of lava dotted with stepping stones, and even baddies like Goombas, Shy Guys, and the Koopalings. But Mario’s not alone: It looks like the sets will include brick versions of his trusty sidekick Yoshi. Mysteriously, Luigi is nowhere to be seen—yet. The sets also allow for an interactive play experience centered around a blocky Mario figure that, using a child’s hand as a size reference, is much larger than the minifigures Lego usually includes with themed sets. The larger size is presumably a direct result of the Mario figure including a speaker that can play memorable sound effects from the Super Mario games, and tiny LCD displays that are used to change the plumber’s facial expressions and to provide visual feedback about Mario’s progression through a brick-built level. According to Lego, the interactive Mario figure will collect coins, which are tracked by the tiny screen on his chest as he makes his way across a level. It’s also used to indicate how or why Mario has been hurt, such as playing a brief animation of flames when the hero falls into lava, and it even serves as a timer letting players know how much time they’ve got left to complete the level they’ve built. Lego hasn’t revealed the specifics of how the Mario figure interacts with other bricks, but it’s safe to assume that a low-power wireless technology such as RFID is being used so that chips can be seamlessly integrated into the various brick pieces.

Why you need a support team

What is Ron Watkins Just Rat His Dad Out as Q

How to Compete with Giants

How to Lego Vidiyo Lets Kids Direct and Shoot Their Own

How To Watch Live Cricket Online

ABOUT US
Theeducat.xyz is a Technology Updates Website for People who want to know about latest technology updates in the world, We update website all about Technology Related Queries Like How to, Gadget Review, Android App Review, How to Use App. etc
Contact us: [email protected]/
FOLLOW US
© Newspaper WordPress Theme by TagDiv
MORE STORIES
Tech News

Why you need a support team